Over her career as a writer Michelle Tea has been a great many things: novelist, poet, columnist, editor, feminist reading organizer, film producer, and many more. She is also an icon of modern queer literature. However, how I found her was as a memoirist.

I was in San Francisco, travelling alone for the first time, and I found a small bookstore that looked like a cross between a charity shop and a library. At the time I was looking exclusively for essays. I’d recently decided that was a road I wanted to take and, seeing as it’s all the rage over there, America was the place to scout them out. On the bookshelf, under Memoir, stood Michelle Tea’s How to Grow Up. On the cover Tea stands in a patterned dress, her hair floating as if she’s in mid-air, and her eyes look knowledgeable. That’s what drew me in. I bought the book there and then, knowing nothing about its content or the author, and it was the best $16 I’ve spent.

After I bought the book I didn’t read it right away (I was nearing the end of Nora Ephron’s Heartburn and couldn’t be torn away from it) but then I got wind of an event at the Jewish Museum in San Francisco. It was a panel with three writers: Jill Soloway (the writer and creator of Transparent), Eileen Miles (acclaimed poet and novelist), and Michelle Tea. I booked a ticket online and went along, not really knowing what to expect.

The event was part of an exhibiton called ‘Read by Famous’ and involved famous people donating copies of their favourite books that would then be auctioned off in aid of reading based charities. The three writers talked for just over an hour and the whole thing was recorded (I’ve posted it above) and I left with three new writers I admired, and I started reading How to Grow Up when I got back to my hotel.

In How to Grow Up Michelle Tea talks about just that. She writes about a ‘path into so-called adulthood,’ that has been, ‘more meandering and counterintuitive than fast-tracked.’ She writes about her ex-partners; a young DJ or a drug addict who sells pills in bus stations. She writes about living with twenty-something’s when she’s thirty-nine, about a trip to Paris Fashion week and getting barged by celebrities, her attempts to get pregnant, her decisions and thoughts around marriage. And she also writes about money.

‘It’s almost as taboo as sex,’ Tea said when talking about the book with Saeed Jones in New York in 2015. In the essay ‘My $1,100 Birthday Apartment’ Tea writes: ‘For me, part of stumbling towards adulthood has included getting real about what things cost, and not getting mad at the world about it.’ She goes on to talk about her ‘scarcity issues’ which are about growing up with money being scarce and being terrified of it being scarce again. Tea writes about how she refused to make any decisions that would up her monthly payments. That meant old internet connected by a landline, and no mobile phone. She talks about the difficulty of going from being broke to being financially secure, and the how the value of money means something to her and she’s always scared of being broke again.

It’s the life of a writer to not necessarily know where money is coming from year to year and it’s that life that Tea portrays in this book. The life of someone who moved from paycheck to paycheck, had various lovers (with varying success rates), has been on the spontaneous trips, and has been addicted to substances. She writes with a rawness and openess that br 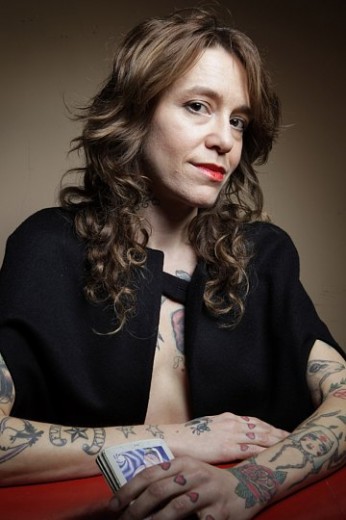 ings a reader into her varied life. She also writes beautfiully about love. The essay about meeting Dashiell, their relationship, and their attempts to get pregnant are heartfelt and tender. A friend of mine, who I lent the book to, said it felt like a voice of experience, a voice you trusted and wanted to listen to.

The title of the book is kind of a curve ball. This is not a step-by-step guide to a happy life, but it’s an example of how Tea grew up. Saeed Jones called it ‘a joyful book but that joy has been earned.’ And that’s what the book is about; Tea finding happiness in moving on and growing up, in finding out what makes her happy, and what doesn’t. That doesn’t mean that in what Tea writes about there aren’t lessons for the reader. I remember reading the final paragraph of ‘How to Break Up’ and weeping on a beach along the PCH because it felt so important for me to read those words at that time in my life.

When I was in San Francsico I was 21 and still grieving the death of my Dad. I was trying to figure out what my place in the adult world was, and how I was going to survive now I was the only person responsible for me. I was bad with money, I was bad with decisions, and I was bad with emotions. I wasn’t in a good place but When I read How to Grow Up it was a like a hand reaching out to me, and pulling me forward gently. The hand of someone who’s been through stuff and is looking back to tell me that I can get through it too. This was the first time I felt like a book was speaking just to me and quite simply, it brought me into a happier place and it means so much to me.

How to Grow Up is published by Plume and is availble here.